Rare Medallion: The Cessation of Transportation in 1853

History of Transportation as Punishment

During the 18th and 19th centuries, British Society was rife with extreme poverty, and the lack of a social welfare system didn’t help the matter. To survive, many resorted to crimes such as poaching, theft, robbery, and violence, with some even forging money. As a result of all this crime, the government created a harsh punishment system centred around protecting private property, to the point that stealing so much as a shilling could lead to being hanged. Other crimes that were punishable by death include cutting down a tree in an orchard, stealing livestock, and forming a worker’s union, which sound very strange by today’s standards!

In 1718 the British Transportation Act was created, allowing criminals to be sent to North America as punishment. This punishment was reserved for those on conditional pardons or whose death sentences had been reprieved. In 1776, North America won the War of Independence, which ended the transportation of convicts. Prisons became overcrowded, so decommissioned naval ships on the River Thames were used to house prisoners, where they would do dockyard work.

The Transportation and Penitentiaries Act of 1784 allowed offenders on these ships to be exiled to colonies in Gibraltar, Bermuda, and, later, New South Wales. Within the first year, more than 700 convicts and guards were sent to Port Jackson, one of the most isolated colonies globally. By the late 1860s, 160,000 more convicts (including men, women, and children) were sent to Australian penal settlements. A number of these convicts were political prisoners and one-off offenders.

The End of Transportation

As the number of free settlers grew in the 1830s, so did the opposition to convict transportation. Newspapers began to air their grievances with the system, citing that convicts brought crime and homosexuality into the colony and were competition to free labourers.
In 1837, the Select Committee on transportation (also known as the Molesworth Committee) was created by the British parliament to investigate the effectiveness of the system in place at the time. The committee concluded that, on the one hand, the approach was too lenient, but on the other hand, it was vulnerable to corruption. They recommended that transportation be phased out, and a new ‘Probation System’ be implemented.
In 1840, the committee decided to bring an end to transportation in New South Wales (the first state to do so), and as a result, the number of convicts sent to Van Diemen’s Land doubled. The Probation System was supposed to be a solution, but instead, it just created even more problems.

To take part in the probation system, convicts were required to have previously served part of their sentence in England. They were then sorted into groups based on the severity of their crimes and sent to ‘Probation Stations’ or secondary punishment settlements such as Port Arthur, for two years. There was a point-based system whereby a convict must earn a certain number of points through good behaviour to obtain a reduced probation sentence. Conversely, the points could be taken away for bad behaviour. Once their sentence was up, they received a ‘probation pass’ allowing them to work for wages under the supervision of police. Good behaviour resulted in a ‘Ticket of Leave’ and then a ‘Conditional Pardon’.

However, these large groups of male convicts (usually around 600) had minimal supervision and resources. Within these groups, only the toughest were in charge. They became viewed as Schools of Crime, especially with the evidence of homosexual behaviour, which was considered “a terrible evil”. Due to the lack of employment opportunities, these gangs turned to bushranging and terrorising the population. This also meant that settlers could no longer rely on free labour. In 1847, to get rid of these gangs and the issues that came with them, the probation system was revised to have more supervision, and the British government halted male convict transportation. Meanwhile female transportation continued as there were fewer complaints – the women were often ignored. This also helped to even out the gender disparity. An alternative solution to male transportation couldn’t be found, so it resumed in 1848. This situation is what led to the end of transportation to Hobart.

In 1849 the Australasian Anti-Transportation League was formed from colonies all over Australia and New Zealand (excluding Western Australia). The League held meetings, demonstrations and petitions and handed out pamphlets favouring a self-governing colony. League members refused to employ convicts as a form of protest. The movement was aided by the discovery of gold in 1851 in New South Wales and Victoria, with the government thinking it unwise to have so many convicts near goldfields. Despite objections from landholders who benefited from cheap labour, the League’s goal was achieved when the Colonial Secretary officially promised to cease sending convicts in February 1853. The final female convict ship arrived in Hobart in April 1853, while the last male ship arrived in May 1853. No longer seen as a land of punishment but rather a land of opportunity, the change was celebrated with the Medallion for the Cessation of Transportation, among other festivities.

In August 1853, there was a 10-day Jubilee Festival in celebration of the Cessation of Transportation, the 50th anniversary of British settlement in Tasmania, and the renaming of the former penal settlement to ‘the Colony of Tasmania’. Throughout the settlement, all shops were closed, and there were ceremonies, bonfires, fireworks, and ships decorated with flags. For children specifically, there was food and entertainment, including the special Jubilee cake and a ticket that would be redeemable for the commemorative Medallion issued in 1855.

Cessation of Transportation medallions were struck by the Royal Mint in England, of which 9,000 were white (such as the one seen here), and 100 were bronze (reserved for those who aided the anti-transportation movement). The medallions arrived in Tasmania in August 1855, where they were distributed in a maroon Morocco case. Most of the medals went to school children in Hobart (4,000) and Launceston (3,000), with the remaining going to country areas. The design on the coin is one of the earliest examples of what would become the Australian coat of arms. 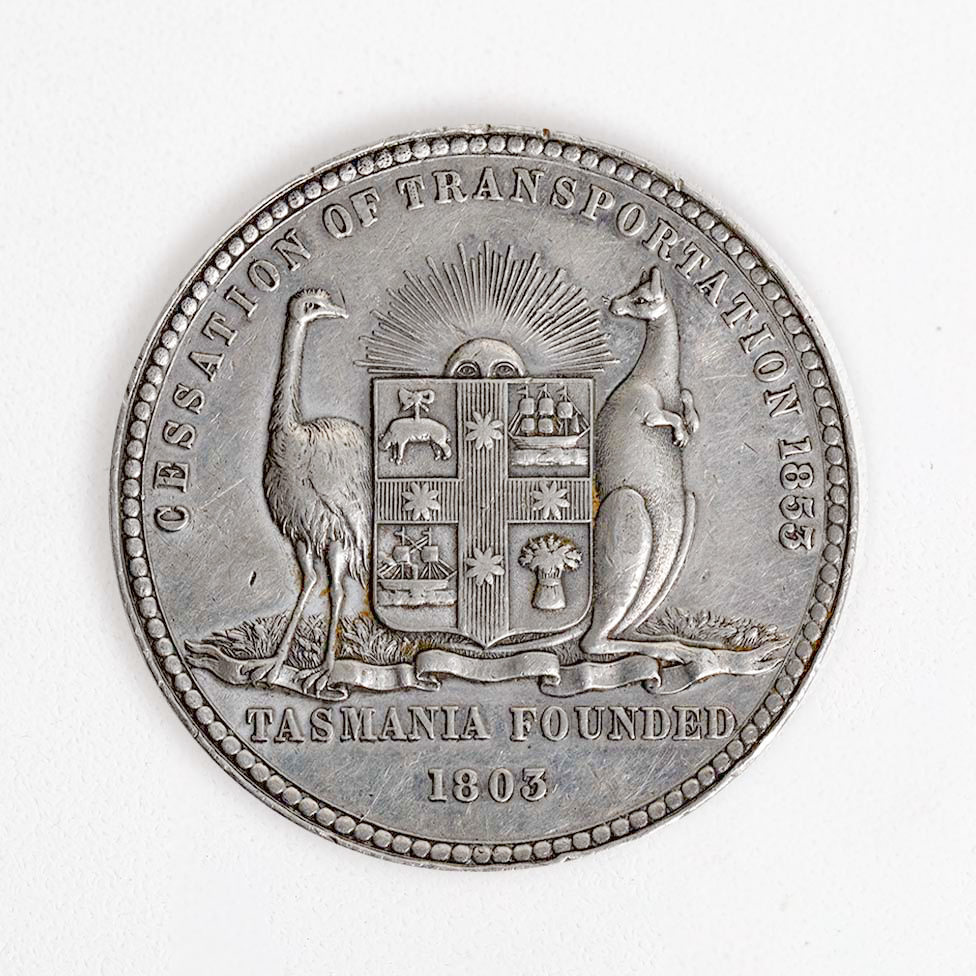 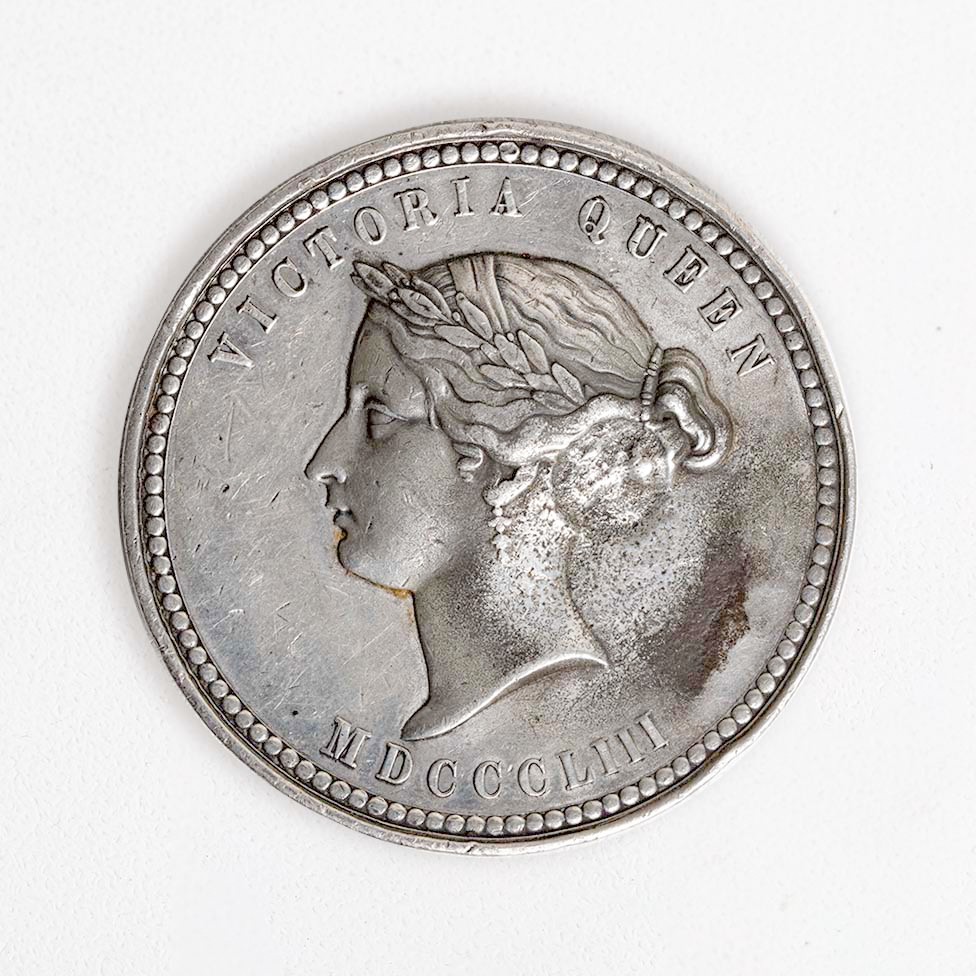 We have one of these rare medallions in our Gallery auction taking place Live Online on Monday, 11th of April, starting 9am.