Home | Articles | Fine and Contemporary | NAMATJIRA FAMILY: The Battle for the Legacy

NAMATJIRA FAMILY: The Battle for the Legacy

Albert Namatjira family cooperated with a number of actors to produce the living landscape. Among his family members is his niece in the person of Selma Coulthard and Lenie Namatjira, who was his granddaughter. These two people used chalk to show the desert landscape of their people on a huge backdrop. Another member of the Namatjira family was Mervyn Rubuntja, his nephew.

It was made known by Gloria Pannka and Lenie Namatjira who were both the granddaughters of Albert that the family has been working very hard for quite long to get the story of their grandfather known. The Namatjira family confirmed that keeping the story going and keeping their culture strong is the most important thing to them.

In fact, all they are after is to ensure that their children are also learning how they were educated and taught by their own parents. This is because they, too, will become grandparents who will be teaching this story to their children as well. This will keep the name of their father and the family lingering in people’s memory all over the world from one generation to another.

One member of the family said that nobody knew the family when they were children, but with the beginning of the watercolour movement, which Albert Namatjira was one of the founding fathers, the family’s name is one of the household names across the world. As a result, the family is doing everything possible to uphold the name.

It was on this note that the family and Big hArt organised an exhibition in London and used that opportunity to mount international pressure of recognition. This was when Queen Elizabeth invited the Namatjira family to her Buckingham Palace, together with the United Kingdom media picking the story up, of the struggle of this renowned family.

However, back home in Australia, the silence is deafening and the family returns home helpless.

Today, the hometown of Albert is a community under pressure to live to tell the tale. More than 50% of the family members subsist in filled to capacity conditions and survive on income support, while about 11% relocated and admitted to hospitals due to constant illnesses.

After decades of injustice, the family of renowned Aboriginal artist Albert Namatjira had finally got the copyright to his works after many years of unproductive campaign. The vibrant watercolours of Namatjira were celebrated globally due to how he captured the Western Desert hues in the hub of the country.

In 1947, one of the paintings of this philanthropist and renowned artist was presented to the Queen of England to commemorate her 21st birthday and in 1954, he met the queen in Canberra during her coronation visit.

Albert Namatjira was born in 1902 and gradually rose to fame as the first Aboriginal artist to master and imbibe a  Western custom. All the family members were happy and proud that the right had been returned to the family. This was a good and welcomed development. It is now left for the family to decide if they will go ahead to make a copy.

Despite his popularity, hard work, and his philanthropist work, Albert Namatjira died a broken man, leaving nothing for his family. This was as a result of his copyright that was sold in the early 80s. 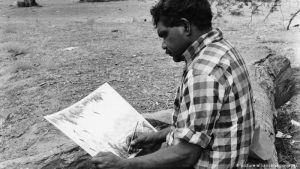 As part of his effort as a philanthropist, this artist supported a community having about 600 people with the money he realised from his artwork before his demise in 1959. He was popular for his dazzling watercolour paintings which made him one of the renowned artists in Australia.

In another development, Albert wanted to lease a cattle station and construct a house in Alice Springs. He was denied this for the fact that he was indigenous.

As a matter of fact, a lot of his artworks are still available in a number of the most prominent galleries all over the world, but his family members are yet to earn anything from copyright or royalties from reproductions of his works. His national earnings were said to be worth more than $10 million in 2012.

There was copyright left for the family by Albert Namatjira. Unfortunately, this copyright to the work of this world-renowned aboriginal artist was sold in 1983 by the Public Trustee, leaving the family with nothing to depend on.

The copyright ought to have expired in 2009, which was the 50th anniversary of the death of Albert. But with the intervention of eminent personalities who stood by and fought the Namatjira family course, the rights of his works were eventually returned back to the family members after many years of fighting and campaigning for justice. 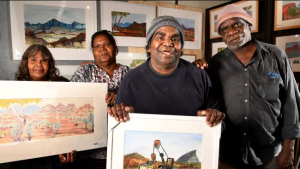 Despite the fact that Albert Namatjira died as a broken man, his family is now enjoying the legacy and goodwill he left behind as a result of the copyright returned to them. The Namatjira family received the copyright after many years of long struggle. This achievement by Dick Smith was referred to as the most satisfying philanthropist thing.

The copyright of Australia’s most well-known Aboriginal artist has been restored to his family after a year’s long struggle. The restoration of this copyright will ensure that the Namatjira family and the tradition of the watercolour movement in the Western Desert lingers on.

HANS HEYSEN: An Artist for All Seasons