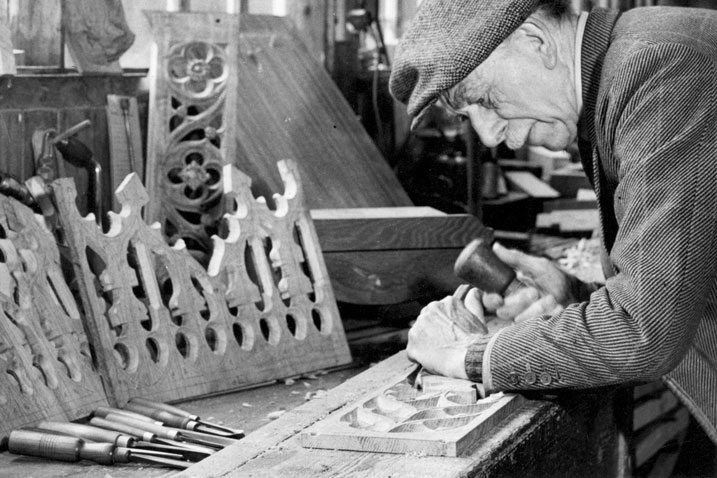 Robert Thompson was born in Kilburn, North Yorkshire in 1876 to the village carpenter and stonemason. At a young age, his father sent him off to be an apprentice engineer to help with his father’s business. This apprenticeship is what gave Robert his knowledge of design. Roberts’s father died in 1895 leaving Robert with the business, which mostly involved repairing barns and fences – work which he didn’t find fulfilling.

From around 1911, Robert began to make furniture for those in his village, although these did not resemble Mouseman furniture as we know it today. When WWI began, Robert was able to remain in Kilburn as his profession was more useful at home than it was on the front line. Once the war was over, he began to receive commissions for furniture more regularly. It was also during this time that he developed his signature style, inspired by English 17th-century designs, including medieval carvings at Ripon Cathedral. He taught himself how to create furniture using traditional tools, such as the mortise and tenon joint which was dowelled for strength. He also mastered the adze (looks like a cross between a hammer and an axe) for shaping and smoothing surfaces – this is also what gives his work the signature rippled look.

Most of Roberts’s commissions came from churches, so he became known for his ecclesiastical furniture. It was fitting, then, how his mousey trademark came about…

How Robert became the Mouseman

In 1919, Father Paul Nevill commissioned Robert to furnish Ampleforth College which was the beginning of Robert’s extremely successful career. In 1920, while working on a cornice for a screen, he “happened to say something about being as poor as a church mouse. I said I will carve a mouse here and did so, and then it struck me, what a lovely trademark.” Each mouse took 45 minutes to carve and it is said that it signifies “industry in quiet places”. Ever since, the mouse was crafted into every piece of Robert Thompson furniture since, earning him the nickname, “Mouseman”.

The mouse became a registered trademark in 1931.

North Yorkshire became quite a hub for handmade furniture, which also included many Mouseman imitators. Many of those who began their careers with Robert Thompson would go on to start their own workshops in surrounding villages, and would also include a signature motif on their pieces. Around 30 “critters” have been identified, around half of which were former employees.

There are two names that are comparable to Mouseman; Tom ‘Gnomeman’ Whittaker and Robert ‘Kingpost’ Ingham. Kingpost didn’t have a critter, as such, but would often have an ivorine plaque on his work. He was actually a student at Ampleforth College where the Mouse motif was born.

So many of the Mouseman pieces remain in production, making it hard to identify the piece’s age from form alone. The mouse is one of the easiest ways to date a piece. Pieces from the 1920s to 1930s have mice with front paws that were prone to breaking. These paws were removed from the 1930s onwards. However, some clients requested that the mice have paws, meaning there are a few post-30s pieces with the original style mouse.

Another good way to identify a piece’s age is the construction details. Table tops made before the 1970s were dowelled, while those after the 1970s are tongued and grooved, while the underside of chairs was changed during the 50s so that the rush rail was positioned differently. underneath a chair where the position of the ‘rush rail’ was changed in the mid-1950s. The earlier chairs also have solid panel backs with legs turned on a lathe.

For more ways to identify a piece’s age, head to Antiques Trade Gazette.

Robert passed away in 1955, leaving his legacy in the good hands of his descendants. The workshop now has a visitor centre and a showroom, and still creates furniture with a little mouse and the same crafting values. The company is now known as “Robert Thompson’s Craftsmen Ltd – The Mouseman of Kilburn.”