With our Classic Motorcycle and Vehicle auction happening this weekend (Saturday 21 May), we thought it would be a great idea to show you a little bit of history in the world of cars! Currently, in Spain, there is an extraordinary exhibition that features 38 cars alongside several hundred works of art, that we thought we’d share with you.
Curated by famed architect and car enthusiast, Norman Foster, ‘Motion. Autos, Art, Architecture’ is an exhibition of the history of automobiles and its connection to modern art. It aims to illustrate that cars are not just cars, they can also be works of art.

Taken from Guggenheim (Bilbao)’s website, the exhibition is described as:

“Motion. Autos, Art, Architecture celebrates the artistic dimension of the automobile and links it to the parallel worlds of painting, sculpture, architecture, photography and film. In this holistic approach, the exhibition challenges the separate silos of these disciplines and explores how they are visually and culturally linked together.
“The exhibition considers the affinities between technology and art, showing for example how the use of the wind tunnel helped to aerodynamically shape the automobile to go faster with more economic use of power. This streamlining revolution was echoed in works of the Futurist movement and by other artists of the period. It was also reflected in the industrial design of everything, from household appliances to locomotives.
“The exhibition brings together nearly forty automobiles—each the best of its kind in such terms as beauty, rarity, technical progress and a vision of the future. These are placed centre stage in the galleries and surrounded by significant works of art and architecture. Many of these have never before left their homes in private collections and public institutions, so they are being opened up to a wider audience for the first time. Unlike any other single invention, the automobile has completely transformed the urban and rural landscape of our planet and in turn our lifestyle. We are on the edge of a new revolution of electric power, so this exhibition could be seen as a requiem for the last days of combustion.”

In the exhibition there are a wide variety of important cars from automobile history, split into seven themed rooms; Beginnings, Sculptures, Popularising, Sporting, Visionaries, Americana, and Future. Eleven of the vehicles on display come from Norman Foster’s own family collection, as well as many belonging to the world’s most prolific collectors and museums. When you first enter, visitors are greeted by Porsche’s first car, a Porsche Phaeton, and a Rolls Royce 40/50 Alpine Eagle.
The exhibition also uses university student designs to show how electric cars are becoming the way of the future.

The Benz Patent-Motorwagen (or “motor car”) was built in 1885 by Carl Benz who patented and unveiled the car in 1886. Shortly before it became available for purchase, Benz’s wife, Bertha, drove the car 194km from Mannheim to Pforzheim. She did this to show that it was capable of long trips, and it went so well, that today there is an antique vehicle parade every two years that goes along the same route that she took. It’s even considered a tourist attraction!
The automobile was originally sold for 600 imperial German marks, which is equivalent to roughly $6,576 AUD today. These days, replicas alone can cost around $80,000! In total, they manufactured 25 of these vehicles, from 1886 to 1893, and the surviving one is considered priceless.
It is considered the world’s first practical, self-propelled automobile, and the first to be put into series production.

The Alpine Eagle is essentially the sporting version of the 40/50 Silver Ghost. It came into being after Rolls Royce entered three Silver Ghosts into the 1913 Austrian Alpine Trials which finished 1st and 3rd. Due to its success, Rolls Royce decided to create an improved Silver Ghost, which had increased ground clearance, a larger radiator, and a four-speed gearbox. It was released a year after the trials (1914) and it was named Continental, but it was more commonly known as the Alpine Eagle which is the name that stuck!

The Type 35 Bugatti is their most successful racing model, winning over 2,000 races from 1924 to 1930. At the time, there was no other car that had tech, design, or performance as good as the Type 35, able to reach 6,000 rpm and 190km/h. They were known for their reliability and endurance thanks to Ettore Bugatti’s dedication to developing lightweight vehicles.
From 1924-1926, the Type 35 won 351 races and set 47 records, after which it won the 1926 Grand Prix World Championships. At its peak, it was averaging 14 race wins a week!
In total, roughly 340 Type 35s were manufactured.

The Atlantic has a very interesting history, originally beginning as the Electron Aerolithe Prototype, made of Electron – an alloy composed of magnesium and aluminium. Unfortunately, while strong, Electron is also quite flammable making welding impossible. Instead, each panel was riveted in place using a method similar to what is used for aircraft, creating the signature seam down the middle of the car. The Aerolithe only received three orders after being unveiled at the 1935 Paris Motor Show, causing Bugatti to abandon the Electron and go with aluminium instead – they still kept the rivet-like seams for aesthetics. Production began in 1936, creating a total of four being produced. Originally, they were given the name ‘Coupé Aero’, but after the second car was built, one of Jean Bugatti’s close friends, Jean Mermoz, died in a plane crash. In his honour, Bugatti named the car “Atlantic Coupé”, a nod to Mermoz being the first to cross the South Atlantic by air.
The Atlantic has a top speed of 200km/h and is believed to be the first supercar ever made.

The Type 165 Delahaye is a V12 built for the 1937 Paris Salon by Guiseppi Figoni and Falaschi. It had a unique (and patented) retractable windshield. It is considered the most beautiful French car from the 1930s, and only five were ever made. The French government decided to send one to the 1939 New York World Fair, however, it remained in customs for eight years due to Germany’s invasion of Poland. It was sent there without an engine, and after being acquired by a Beverly Hills car dealer, a Cadillac V8 engine was put in its place. It wouldn’t be until the mid-eighties that the original engine would be put back into it.

At the time of production, the Z-102 was the fasted car in the world, reaching a top speed of 243km/h. Even so, it was never really a successful racing car as it was far too heavy, even after changing from a steel body to an alloy body. It was discontinued in 1958 as it was too costly to justify being mass-produced.
The Cupola model was based on Spanish student’s sketches themed around futuristic cars. In total, 84 Z-102’s were made, just two of which were Cupolas.

BAT stands for Berlinetta Aerodinamica Tecnica, and until 2011, only three were ever made. First the BAT 5, then the BAT 7, and finally the BAT 9. They were a collaboration between Alfa Romeo and Bertone (an Italian design house). Their goal was to research and create vehicles with the lowest possible drag. They all featured large rear bumpers and curved fins, and were featured at the Turin Auto Show one after the other from 1953 to 1955. The lowest drag coefficient achieved was 0.19, which is impressive, even today! 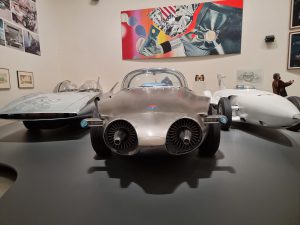 In 1954, the Firebird I was built, and it was the first ever gas turbine automobile in the US. The Firebird was created to see if the gas turbine was efficient and economical for future vehicles. The Firebirds contain an engine called “Whirlfire Turbo-Power” which powered the car through a power turbine on the rear wheels. The work was groundbreaking, utilising the California Insitute of Technology’s wind tunnel.
In 1958, the Firebird III was released, and it was the most influential of the bunch, being the only one to impact the design of mass-produced vehicles. The 1959 and 161 Cadillacs both took inspiration from the Firebird III.

The DB5 is considered “the most beautiful Aston Martin” and “the most famous car in the world”  being featured in multiple James Bond movies. It’s seen as “quintessential vehicle of the character.”
It first appeared in Goldfinger in 1964, and went on to be in many others (although not the exact same car) including:

This was the original DB5 prototype and after filming was returned to Aston Martin who removed the gadgets and sold it. In the 90s it was stolen and hasn’t been seen since.

The Lancia Stratos Zero is a concept car developed by Bertrone.  It has been shown at many shows and exhibitions in the last 52 years, the first of which was the Turin Motor Show in 1970 which is also when it was unveiled. Until 2011, it was on display in Bertone’s museum, until they sold it for over $1.3 million in auction. It has also been displayed in Petersen Automotive Museum’s exhibit, “Sculpture in Motion: Masterpieces of Italian Design”, the High Museum of Art’s exhibit, “Deam Cars, as well as Michael Jackson’s film, Moonwalker.

Born in 1935, Norman Foster is an English architect and designer who established the UK’s largest architecture firm in 1967. He’s also an avid driver, car collector, accomplished pilot, and a fan of yacht, train, and aircraft design. He’s even said to have based some of his architecture on vehicles he’s seen. One example is the Sainsbury Centre’s corrugated metal panels inspired by the Citroen 2CV.
For this exhibition, Foster approached the Guggenheim with his idea so that he could share his passion for cars with the world!

While we may not have any vehicles quite as high-profile as these, we have some pretty amazing bikes that are important to the history of automobiles. We have some as old as 1913!
View the catalogue >
21 May, 10am
Scammell Auctions
In-Person and Online